DANA WHITE has shut down the possibility of a rematch between UFC star Conor McGregor and Floyd Mayweather.

The two fighting juggernauts collided in 2017 inside a boxing ring but McGregor was unable to topple undefeated Mayweather.

McGregor was stopped in the tenth round of the sanctioned boxing match.

Mayweather retired 50-0 shortly after, but continued to fight inside the squared circle with several exhibition fights.

News broke over the weekend of negotiations between McGregor and Mayweather on a potential $1billion second fight.

But UFC chief White says McGregor’s return to fighting will be inside the octagon. 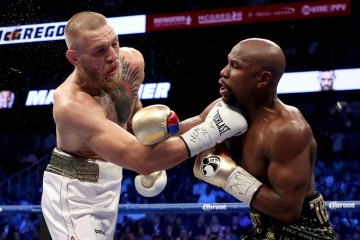 The Dubliner has been out of action since breaking his leg against Dustin Poirier last July.

White told The Jim Rowe Show: “Not me, I’m not talking about that.

“[McGregor’s return] will be in the cage.

“Conor’s looking to come back the end of this year, early next year.”

White says fighting is what McGregor wants to do. Not movies or other avenues where he can make money.

The 52-year-old continued: “When I do talk to Conor, Conor wants to fight.

“Conor gets all kinds of offers for movie roles and all these other things that he could go and do and make money.

“He doesn’t want to do any of that. Conor wants to fight.

“When he fights, he gets paid. Fighting is what he wants to do.”