CONOR McGREGOR got into the festive spirit by making a CHRISTMAS TREE out of Proper 12 whiskey bottles.

The Irishman posed in a black tracksuit in his Black Forge pub in Dublin.

And he stood next to a gigantic pile of Proper 12 bottles, incredibly shaped as a Christmas tree.

It comes after being sued by his former training partner Artem Lobov over the sale of the whiskey drink.

McGregor, 34, sold his controlling stake in the whiskey business, alongside two other shareholders, for a combined £500m last year.

Lobov, a long-time friend of McGregor’s, alleges he was the brains behind the Irishman’s popular drink. 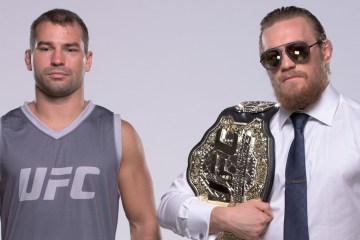 The Russian has now opened court proceedings in Ireland claiming he is entitled to five per cent of the profits from the Proper 12 sale, according to the Irish Independent.

Lobov, who is based in Ireland and now retired from fighting, previously claimed he turned down £840,000 from McGregor.

McGregor will reportedly contest the lawsuit, which is likely to be worth several million pounds.

Lobov’s solicitor Dermot McNamara told the Irish Independent: “My client is a retired professional fighter with a master’s degree from DCU in Finance and Capital Markets.

“We have issued High Court proceedings on his behalf to enforce an agreement with Mr McGregor regarding the Proper No. Twelve whiskey brand.

“My client was the initial creator and co-founder of the concept to launch an Irish whiskey brand associated with Mr McGregor.

“As these matters are now before the court, we will not be making any further comment.”

In response, McGregor’s spokesperson claimed suggestions Lobov had a claim to Proper No. Twelve were “incorrect”.