THE UFC’S Performance Institute is the £12million state of the art training facility on offer to fighters for FREE.

The Las Vegas facility launched in May 2017 and became available to use for the UFC roster at the cost of nothing.

A full-scale boxing ring and MMA cage is fitted in as well as a heavy bag area and strength and conditioning area.

Fighters can help themselves to healthy snacks at the Fuelling Station, which offers protein shakes, yogurt, fruit and supplements.

Consultations are also on offer to help with advise on what to eat and how to cut weight safely. 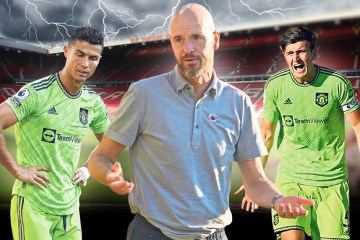 Amazingly, there are even nap pods, fixed with relaxing music and allow for a 23-minute snooze.

It wakes you up with vibrations and sounds that become increasingly louder.

Further helping fighters recover is the therapy room, which has whole-body laser light therapy pod and a Cryosense chamber.

The adjacent room has an underwater treadmill and both hot and cold plunge tubs, commonly used for recovery.

Sauna and steam rooms are also available for use, either to help after a session or for weight cutting.

The centre also has a physio and offers a variety of options including dry needling, cupping and Pilates.

It allows UFC stars recovering from injury to do their rehabilitation at no extra cost.

Conor McGregor, 34, famously used the PI before his 2017 boxing match with Floyd Mayweather, 45, which he lost in round ten.

McGregor used the hypoxic chamber extensively in his camp.

The chamber simulates elevation up to 22,000 feet, which reduces oxygen levels to 50 per cent, making sessions twice as hard.

Not only do contracted UFC fighters use the facility, NFL, NBA, NHL and MLB athletes have also taken advantage.

And in June 2019, a second facility was opened in Shanghai, with Olympians from China used before the delayed Tokyo Games last year.

The UFC have come under fire in recent years by the likes of Jake Paul accusing them of underpaying their stable.

But England’s Darren Till pointed out how well treated UFC stars are, using the PI as an example.

He said on Ariel Helwani’s show: “I just want to give a big, big shoutout to the UFC team.

“So, this is the thing Ariel, right, that a lot of people jump on and a lot of people talk about things like fighter pay and how much Dana White and Hunter [Campbell] don’t pay the fighters.

“People seem to forget that we have a $20 million facility here and it’s open for all the fighters with food, with nutrition, with strength training, with anything you want.