MARK WAHLBERG wants to star in a movie alongside Conor McGregor.

The Hollywood superstar believes that the Notorious could be a revelation on the big screen.

Earlier this month it was announced that McGregor, 34, would be making his acting debut in an Amazon Prime remake of 80s action classic Road House.

The Irishman will star alongside A-lister Jake Gyllenhaal – and Wahlberg believes this could be just the beginning for the former UFC two-division champ.

Asked whether McGregor will be a hit on the big screen while appearing on the Pardon My Take podcast, the 51-year-old said: “In the right movie, absolutely!”

He then added: “I gotta get Conor to be in a movie!” 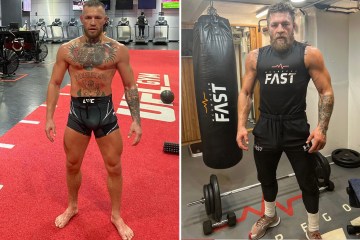 Wahlberg would never switch roles with McGregor and get in the octagon, however, as his son won’t let him.

Road House will follow the story of James Dalton, a no-nonsense bouncer tasked with cleaning up a notoriously rough bar.

According to a press release, Gyllenhaal will play the lead character who “takes a job as a bouncer at a rough-and-tumble roadhouse in the Florida Keys, but soon discovers that not everything is what it seems in this tropical paradise”.

It’s not yet been confirmed whether McGregor will play himself or a fictional character.

The MMA poster boy has been hitting the weights hard since breaking his leg against Dustin Poirier last year.

As he edges closer to an octagon comeback, he now looks the biggest and most jacked that he has ever been.

The Notorious shared images of himself in the gym this morning, his muscles bulging and covered in veins.