UFC megastar Conor McGregor has explained his decision to return to the welterweight division later this year.

The Irishman is recovering from a broken leg suffered last summer in his trilogy bout with Dustin Poirier.

But he has stepped up his recovery ahead of a potential return to the octagon later this year by starting boxing training in Dublin.

Speaking to the Mirror, McGregor has confirmed he will return to the welterweight division currently dominated by Kamaru Usman as has provided an update on his leg.

He said: “Straight back into training.

“I’m looking forward to getting back into the octagon – we’ll see what happens, the leg’s getting better every day, I think 170 is where I’m aiming for, I feel good at this weight.” 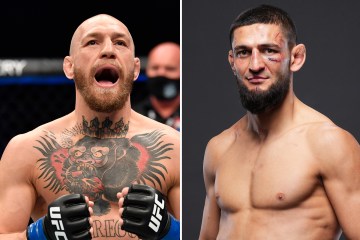 McGregor would like to take on Usman in his returning bout.

But ex-UFC lightweight Josh Thomson has cast doubt over whether 33-year-old will come back the same man who toppled Jose Aldo or Eddie Alvarez in his prime.

Thompson said on his podcast: “ Conor McGregor can say whatever he wants. He is not one hundred percent dedicated to fighting.

“And even if he became one hundred percent dedicated to fighting, we still would not see the Conor McGregor of old. It just wouldn’t happen.

“He stepped away for too long, his mind is going in a hundred different directions, and he has a huge family now.

“Going on his fourth kid coming. It’s just not there anymore. And he continued to sit here and say that it is.

McGregor became the first fighter in UFC history to score knockouts at featherweight, lightweight and welterweight in January 2020 with a 40-second demolition of Donald Cerrone.

But Usman reminded The Notorious that he has also been submitted in each of those divisions.