White’s gift caused outrage among some MMA fans, who were quick to lambast the UFC’s pay structure.

The veteran promoter, however, quickly brushed off the criticism, telling Pat McAfee: “Let me set this record straight: First of all, all these people on the internet, go f*** yourself.

“No. 2, if you look at what Kyle and the Nelk Boys have done as far as Howler Head and a lot of other things that they’ve done, those kids have never asked me for anything, ever. 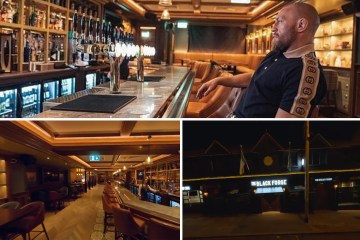 “Never asked me for anything, and they couldn’t be better people; Kyle has done so many things for me, and believe me, the $250,000 that I have him for his birthday does not cover the amount of things that that kid has done for me.

“So don’t count other people’s money, and mind your own f*****g business.”

White, 53, has borne the brunt of fan criticism over fighter pay in the UFC over the years.

But he insists the pay structure of mixed martial arts’ premier promotion is fair and just.

During a recent appearance on The Pivot podcast, he said: “We built a business model where, if you’re the champion, you share in the pay-per-view revenue.

“If you’re the guy headlining the card, or there’s been some special occasions where we know you’re bringing in the money, too, and you’re a big draw so you, too, get to share in the pay-per-view revenue.

“You eat what you kill.

“And you’re never going to have the guys on the other side worrying about the business of the sport.”