MUHAMMAD ALI’S grandson Biaggio has signed with the Professional Fighters League in the hopes of launching a succesful MMA career.

The former American football prospect began training in 2020 and has a 1-1 record in the cage, winning in August.

His brother Nico Ali Walsh, 22, is currently a 6-0 middleweight contender, following in the footsteps of his iconic grandad.

But Biaggio, 24, chose to take his fighting roots to the cage and has signed with PFL, the sport’s only promotion with a seasonal format.

He said:  “I want to thank Professional Fighters League for their support and confidence in me. I can’t wait to enter the PFL SmartCage.

“I have a legacy to live up to, a legacy that my grandfather began, that my brother and I continue, I chose to continue that legacy here in the Professional Fighters League. 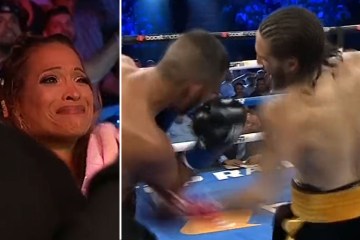 “My one and only goal is to one day become a PFL world champion.”

PFL’s format consists of two regular season bouts, where points are earned according to the method of victory, and then the play-offs.

The top four in each division then qualify into the knockout phase, with a semis and finals following.

All winners then progress into the winner-take-all finale fight where a $1million cheque and title belt are on the line.

HOW TO GET FREE BETS ON HORSE RACING

Lightweight Biaggio will make his PFL debut in November with a spot the undercard of this year’s championship final.

PFL CEO Peter Murray said: “The Professional Fighters League is committed to growing the league and the sport of MMA, it is incumbent upon us to look for the future stars of our sport, we have found one of those stars in Biaggio.

“We are excited to watch Biaggio’s journey from amateur to professional on the world stage with the PFL.”