UFC heavyweight champion Francis Ngannou has called out 3ft4In Hasbulla despite being 200lbs different in weight.

Internet sensation Hasbulla, 19, revealed he signed for the UFC on Thursday in what is believed to be a five-year contract.

He said: “The rumours are true. I have officially signed a deal to fight in the UFC!

“Details will be revealed by the end of the year.

“Thank you to @ufc , @danawhite , @khabib_nurmagomedov, @sungurov_usa, @justinozuna and everyone who helped make this dream become a reality.

“All my fans will be able to buy a Hasbulla fight kit soon on UFC.com and hasbulla.com.” 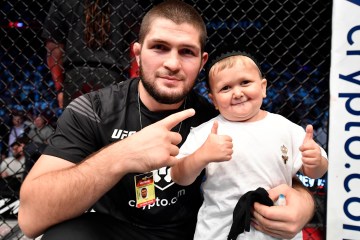 Hasbulla is best known as Mini Khabib, with the Dagestani believed to be close to one of the UFC’s greats, Khabib Nurmagomedov.

He has a genetic disorder that gives him childlike characteristics such as stunted growth and a high voice.

Although it has not been officially confirmed, it is believed that he has a form of dwarfism.

Despite the considerable difference in height and weight, UFC heavyweight champ Ngannou has called out Hasbulla.

The 36-year-old said on Twitter: “I think I have my next title defense.”

A photo-shopped picture of Hasbulla squaring up accompanied the Cameroonian heavyweight’s tweet.

However, many don’t think Ngannou would last past round one against Hasbulla, who can count on elite training from Nurmagomedov and Co.

A loss to the 3ft4in viral star would be Ngannou’s fourth career defeat.

Another said: “I don’t know if Ngannou has the reach.”

Some say Ngannou should pick on someone his own size… and that could mean moving into boxing.

Talks were also held over a bout with the returning Deontay Wilder.

Such fights would land Ngannou a massive payday.