PAIGE VANZANT didn’t leave much to the imagination as she shared a daring picture in lingerie.

The former UFC fighter posted a raunchy photo of herself in nothing but lingerie and a dressing gown.

In the photo she can be seen licking a red landline telephone.

The post was paired with the caption: “hi, this is paige! leave a message after the beep 🥰”

Fans responded with some funny messages back. 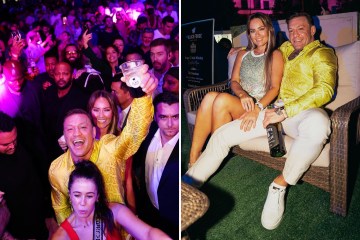 A second user added: “Your voicemail is full. Please delete your messages!”

A third respondent used the prompt to ask a question, saying: “fr (for real) tho I have 1,146 unheard voicemails going back to 2020 and was wondering if anyone knows how to delete them all at once.”

Another user replied with a gif of a dog saying hello.

With her impressive following she has revealed she earns more money from posting pics than any of her MMA disciplines or from her Onlyfans.

She is set to make her bare knuckle boxing return at BKFC’s third KnuckleMania event on February 27.

It is a must win fight for her if she is to keep her BKFC career alive since she has yet to taste victory since inking a l ucrative multi-fight in the summer of 2020.

But she has also revealed she will also make her return to Wrestling with AEW after making her debut in May.