FRANCIS NGANNOU has been stripped of his UFC heavyweight title – paving the way for MMA legend Jon Jones to make a triumphant return.

“We offered Francis a deal that would’ve made him the highest paid heavyweight in the history of the company, more than [Brock] Lesnar, more than anybody.”

But UFC president Dana White has revealed the Cameroonian-French fighter has been released from UFC after failing to agree new terms on his deal.

White claimed the contract offered would have made Ngannou the “highest-paid heavyweight” in the history of UFC.

But the two parties have failed to strike a deal after long-running talks, leaving Ngannou as a free agent and the heavyweight belt has been vacated.

White also revealed Jones will make his long-awaited return to the Octogon to compete for the undisputed heavyweight championship against Gane in March. 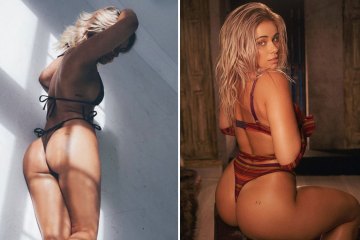 News of their clash had been leaked earlier this weekend but has now been confirmed.

The 35-year-old has not fought in UFC since his February 2020 fight with Dominick Reyes, which ended in a controversial Jones victory.

It was the 26 wins in a decorated career which has only seen him lose once after being disqualified against Matt Hamill in 2009.

Jones is a former two-time light heavyweight champion but has previously spoken about moving up to heavyweight.

In the time between his last fight, he has also been embroiled in contract disputes with the UFC but has now reportedly signed a new eight-fight deal.

Jones has won his last four bouts since a win over Daniel Cormier was overturned after he was revealed to have failed a drug test.

Frenchman Gane comes into March’s heavyweight fight with an 11-1 record.

Since his defeat to Ngannou, he bounced back with victory over Tai Tuivasa in September last year.